What says "retro fun" more than a vintage pinball machine, fully functional and restored to its original glory, lights flashing and bells ringing? How about eight of them, lined up in a row, and no coins required to play as long as you want?

Students who call Manzanita-Mohave Residence Hall their home during the semester were treated to this unique opportunity week before last. For one whole day, students could play on eight pinball games representing various eras and themes, a welcome break from studying that had them trying their skills at shooting shiny silver balls through miniature mazes of flickering colors, metal rail chutes and rubber-lined poppers.

The machines were provided by Eric Lyons, an assistant professor at the UA's BIO5 Institute, and his wife, Marisa Michaels, lecturer and associate director of the business communication program at the Eller College of Management.

Michaels said she came up with the idea to set up a pinball arcade for a day when she was looking for "something unexpected for the students during midterms, as a reminder that they need to take breaks from studying."

Michaels is one of two faculty fellows for Manzanita-Mohave, which houses 282 students majoring mostly in arts, theater or music, as well as 70 pre-business majors. The other is Ed Reid, director of the Fred Fox School of Music. 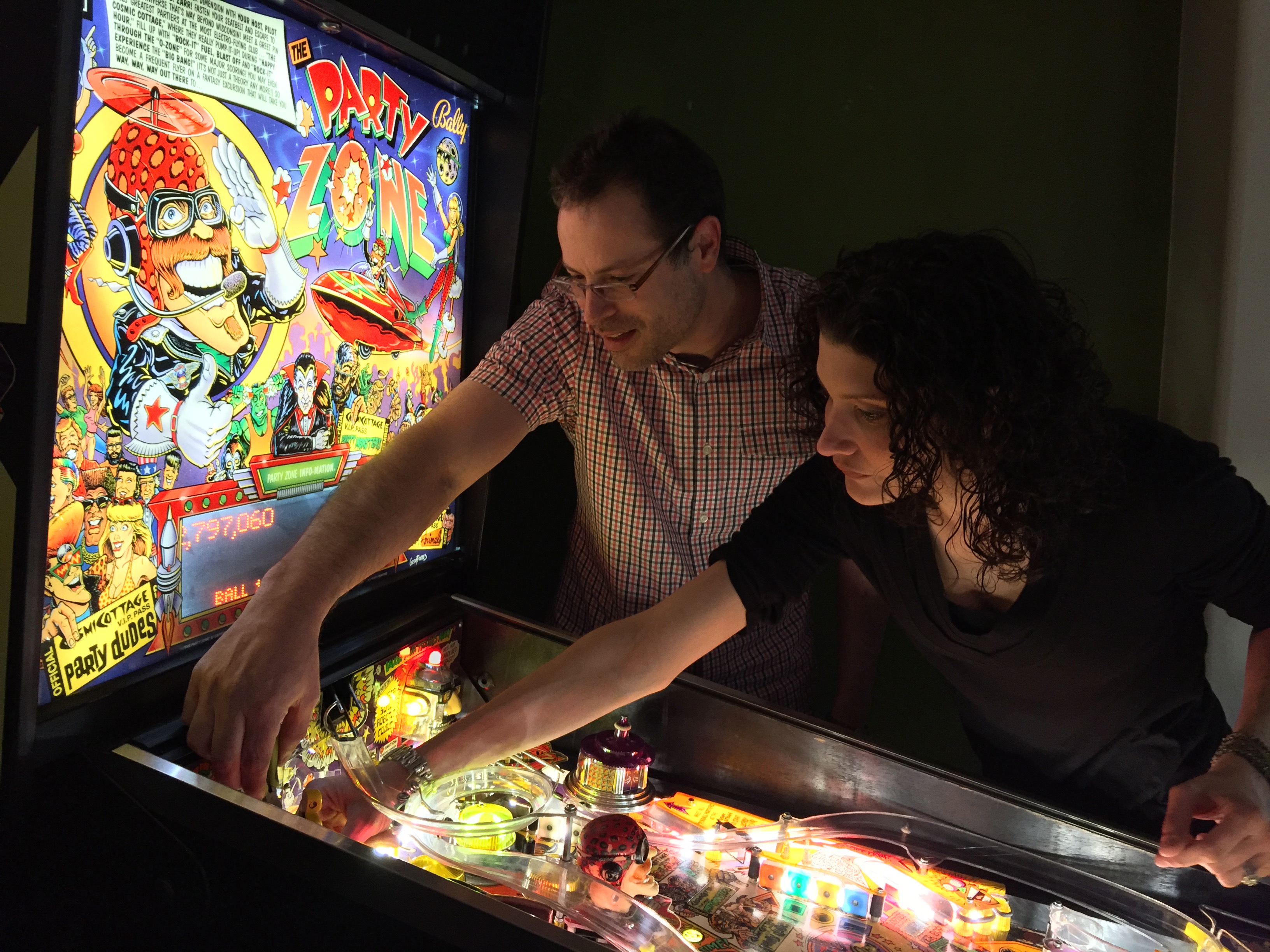 The faculty fellows program, which is administered by the Office of Student Affairs and enrollment Management, aims to boost engagement between UA faculty and students, and to show that "professors are real people, not just faces talking from a stage in a lecture hall," Michaels said.

"No one activity is going to draw in every one of them," she says, "so I try to do things that bring in a few at a time. It's good for me as a faculty member, and helps me get a better idea of what my students are thinking and what's going on in their lives outside of the classroom."

"There is a very special energy about the group of students in this hall because they're so diverse and incredibly talented," she adds.

For the pop-up arcade, Lyons and Michaels brought a selection of games ranging from the early 1980s to the 1990s. Lyons rented the largest U-Haul truck available to move the games, which weigh about 250 pounds each, to the residence hall. The effort took several groups of student volunteers, a commercial-grade hand truck, stacks of moving blankets and a pickup truck.

Despite their weight, most games are easy to move, disassemble and reassemble. They also are built to take some spirited jostling.

"Nudging and bumping is all part of the game," Michaels says. "And sometimes that's the only way to not lose the ball. But if you hit it too hard, the game will sense that and tilt you out."

Lyons, who studies plant genomes and develops advanced computer systems to manage huge scientific data sets, said he and Michaels picked games that were more on the "player-grade" side than the "collector" side.

The couple has amassed 15 pinball machines since 2010.

"Eric always liked pinball," Michaels said. "When we moved to Tucson, he asked, 'Hey, can we get a pinball game?'"

Thanks to the pop-up arcade, the couple has converted a few new fans.

Over the course of the day, a hand-drawn sign welcoming residents to the pinball arcade was decorated with a colorful collection of Post-it notes conveying scribbled messages of appreciation and affection for Michaels.

"At first, it's a bit overwhelming with all the noise and so many lights," said Ashton Proctor, an exchange student from the University of Wyoming in Laramie, who is studying criminal justice and serves as a residence assistant in the hall. After trying all games in the room, she decided that Galaxy, a sci-fi-themed game, was her favorite.

"Pinball is very retro and very tangible," she says, "and as someone who played mostly video games and never went to arcades growing up, I think that's really cool."